Roscoe White above with and without toupee; Roscoe White’s wife, Geneva, with Jack Ruby below left.  Below right is Roscoe White’s scrapbook clipping of his shooting spot behind the picket fence from the Moorman photo.  There is a faded ‘x’ penciled in the upper left corner of the photo: 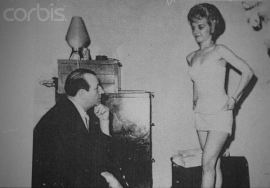 ‘Honey, it’s like war. The president is a national security threat. If I don’t do it, we’ll be in a nuclear war very soon…matters were taken out of our hands a long time ago.’ –Roscoe White 11/21/63

‘Kennedy has been a pretty good president, but he has to die. He didn’t carry out his own orders. If I don’t carry out my orders, I’ll have to die, too.’-Roscoe White to his pastor, Jack Shaw, 1971

‘I was Mandarin, the man behind the stockade fence who…