Talks over a historic bout for the undisputed title began in early May.

Joshua, 30, holds the WBA, IBF and WBO belts while 31-year-old Fury is the WBC champion.

“It’s fair to say [Joshua and Fury] are in agreement regarding the financial terms,” Hearn, who is Joshua’s promoter, told Sky Sports News.

“We’re in a good place. It’s fair to say that, in principle, both guys have agreed to that fight. Two fights.”

Fury expressed his delight at the news in a social media post. The Manchester-born boxer said he would fight Joshua in 2021, but would first have to overcome the “hurdle in the road” Deontay Wilder, in a third meeting. Fury is contracted to fight the American, from whom he won the WBC title in February.

Joshua, who reclaimed his world titles in December, has to face his mandatory challenger, Bulgaria’s Kubrat Pulev, when the sport fully resumes after the coronavirus shutdown.

Hearn added: “There is still a lot to overcome. We are looking at venues and dates.

“We’ve been talking to [Fury’s management team] MTK, giving them the assurances from Joshua’s side that all the details on the structure of the deal is approved from our side. And it is from Fury’s side, as well.”

Speaking to BBC Radio 5 Live, Fury’s promoter, Frank Warren, said: “The only way it could not happen is if one of the guys gets beat.”

“[Fury’s] really happy… it’s something he wants, something he’s wanted for a long, long time.

“I think it’s a great fight for both of them and for fans in this country and round the world.

“It’s not going to get any more competitive than this.”

Joe Biden, the presumptive Democratic presidential candidate, acknowledged concerns about his support for a 1994 crime bill that critics say contributed to the mass incarceration of racial minorities in recent decades.

Speaking during a National Association for the Advancement of Colored People (NAACP) town hall event on systemic racism, Biden said questions about his role in writing the bill are “legitimate”. But he insisted that people should judge him based on his current actions, not his past.

“Watch what I do. Judge me based on what I do, what I say and to whom I say it,” he added.

Since 2018, Capital One has been a looming presence in Julio Lugo’s life, ever since the company sued him, as it did 29,000 other New Yorkers that year, over an unpaid credit card. But when the coronavirus hit the city this March, it wasn’t on his mind.

At Mount Sinai in Manhattan, where he works, he’d been drafted into the hospital’s frenzied effort against the virus. He normally gathered patient information at the front desk of a radiology clinic in orderly shifts, 9…

Jay Inslee, governor of Washington state, has ordered an independent investigation into the death of a black man who died while in the custody of Tacoma police.

The move comes after new information emerged this week that at least one sheriff’s deputy and a state trooper were at the scene when the man, Manuel Ellis, was detained and died on March 3. In a nearly nine-minute clip released by the attorney representing Ellis’s family, the 33-year-old man is heard crying out “I can’t breathe, sir” while handcuffed.

The medical examiner ruled the death a homicide.

The Pierce County Sheriff’s Department had been close to finishing an investigation, and a briefing with the prosecuting attorney was scheduled for Wednesday. Inslee said he ordered a new probe to make sure that the work is “done free of conflicts of interest” as officers from the sheriff’s department were present at the scene.

The police department has identified the four officers involved in restraining Ellis. They were put on administrative leave last week after the autopsy results were made public.

Tacoma Mayor Victoria Woodards and the victim’s family have called for those officers to be fired and arrested.

Japan may restart business trips to and from Australia, New Zealand, Vietnam and Thailand as early this summer, easing an entry ban to prevent the spread of the new coronavirus, Reuters news agency reported on Thursday quoting the Yomiuri newspaper.

Up to 250 business travellers a day will most likely be allowed into Japan from the four countries, which have seen their infection situations stabilise, the newspaper said, without citing sources.

Prospective visitors will be required to submit a document ahead of their trips to Japan showing they are not infected, and will be asked to go through a PCR, or polymerase chain reaction test, upon entry, the paper said.

In another step to ease coronavirus-related restrictions, the Tokyo metropolitan government is set to lift the “Tokyo alert” issued last week to urge residents to keep up their guard as early as the end of the week, the Nikkei business daily said. The number of daily new infections in Tokyo has stayed below 20 for the past four days. 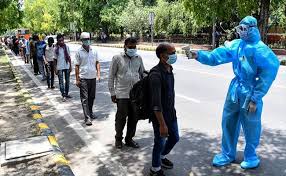 India reported a record of 9,996 new coronavirus cases over the past 24 hours with health services in the worst-hit cities of Mumbai, New Delhi and Chennai getting swamped by the rising infections.

The Health Ministry reported an increase of 357 deaths. India’s tally of positive cases has reached 286,579 so far, the fifth highest in the world, and 8,102 deaths.